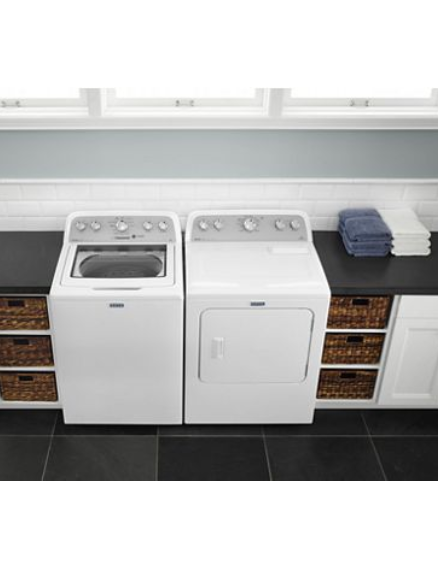 When your Maytag gas dryer model MGDX655DW is no longer generating heat, your laundry routine can get a bit chaotic. However, before you start disassembling your appliance to search for a possible malfunction, take a minute to rule out an airflow issue by inspecting your dryer’s venting system. If you don’t find any obstructions interrupting the appliance’s air circulation, it’s time to investigate the most common malfunctions that lead to a non-heating gas dryer.

To avoid electrocution, unplug your dryer from the wall or switch it off at the circuit breaker. Don’t forget to turn off the gas running to your appliance before you begin your repair. Gloves and safety goggles should be worn to protect your hands and eyes from sharp objects during the disassembly and assembly process.

The coils on your dryer’s igniter glow orange as they heat up. Once the component reaches the appropriate temperature, the radiant flame sensor will open the gas control valve. The igniter than ignites the gas released by the valve. Unfortunately, the coils on an igniter can burn out, meaning the component will not achieve a high enough temperature to open the gas control valve. If your dryer has a faulty igniter, the part will need to be replaced to resolve the appliance’s heating issue.

How to Replace an Igniter in Your Maytag Dryer

How to Replace the Flame Sensor in Your Maytag Dryer

If your gas dryer isn’t getting hot and you’re unable to pinpoint the malfunction, please contact us today to schedule an appointment with one of our highly trained appliance repair technicians.