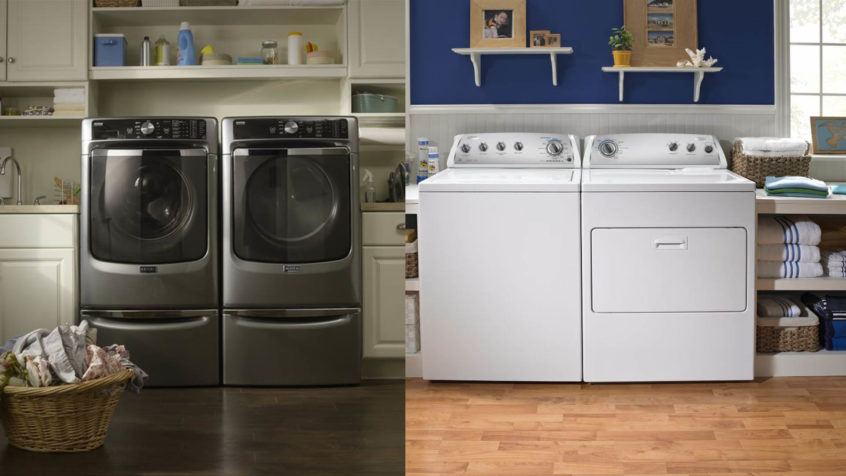 For many families, especially those with young children, laundry tasks are a daily occurrence.  Given that a washing machine often plays a vital role in these types of households, it is worth spending some time to consider the different aspects of various washing machines, in order to decide which design will work the best for your specific needs.  Even for those whose children are grown and gone, there are still aspects to consider that can either make laundry a breeze or an uncomfortable task.  In this post, we will discuss the pros and cons of both top and front loading washing machines, so you can decide which is the best machine for your particular situation.

Top loading washing machines are a great choice for those who find it uncomfortable to bend over in order to insert laundry into a machine.  They also come in a variety of widths and depths, making some models easier to fit into tight spaces.  Both of these features together, often are enough to steer senior citizens into a top loading machine, since they frequently have difficulty bending over and they may have downsized into a smaller apartment or home.

Between the two different types, front loading washing machines are considered the serious work horses in the world of laundry.  They are typically bigger and can easily handle large items such as a queen or in some cases, even a king-sized comforter.  Front loading machines are generally stackable, which makes them a viable choice in at least some tight spaces.  They typically use less water, yet their ability to clean heavily soiled items still reigns supreme when compared to most top loading machines.

For the cons, front loading machine tend to vibrate more than their top loading counterparts and their wash cycle is typically longer as well.  Due to their design, these types of machines tend to gather musty odors more easily than top loaders.  Some manufacturers recommend keeping the door open between loads to allow air flow, but that can be a traffic hazard or a safety issue in households that have small children or pets.  In addition, front loading machines are typically more expensive than top loading machines.

When comparing the two machines, there is no right or wrong choice.  The right washing machine for your household is the one that can physically fit in the space provided, as well as fitting within your budget and your particular lifestyle.