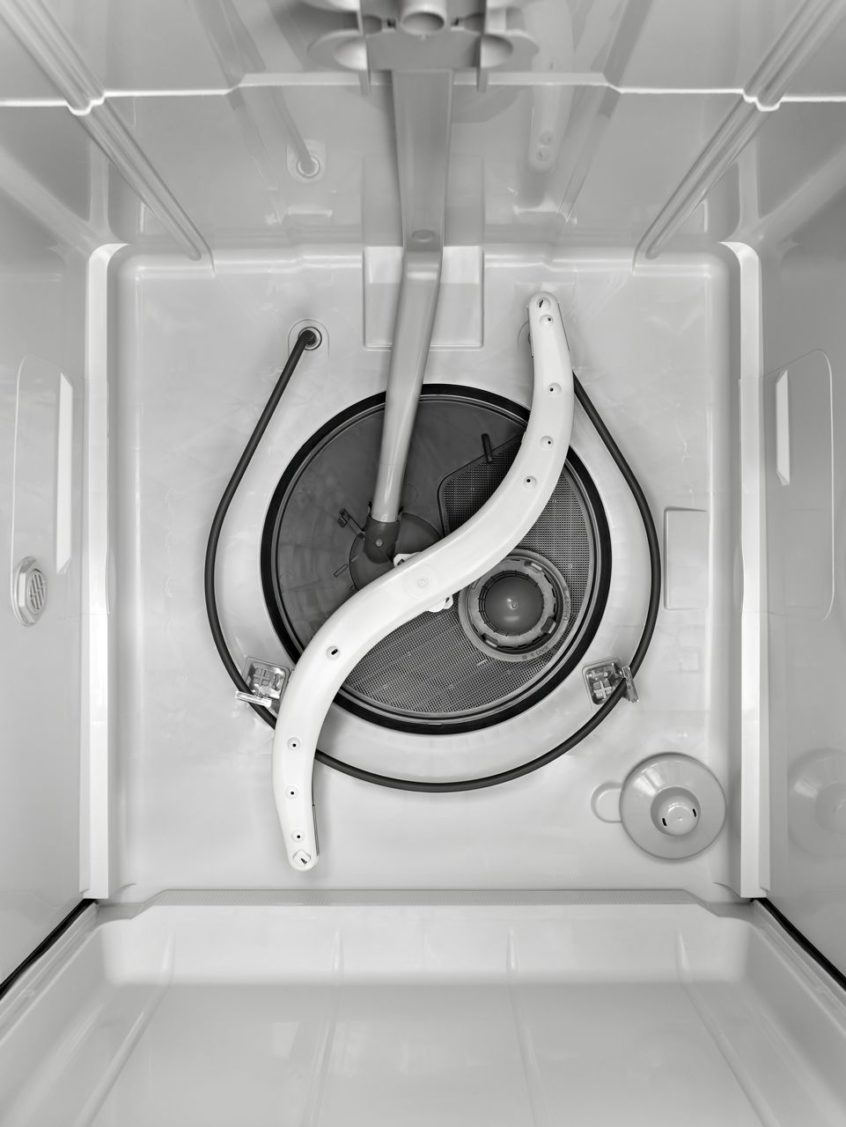 If your dishwasher is leaking above the motor at the bottom of the dishwasher, the problem could be any of the pump seals around the part. Order a pump seal kit with replacements for three seals and the drain impeller gasket; the kit is part #675703 for Kenmore dishwashers. Then follow these steps to replace all of the seals and the gasket.

1. Unplug the dishwasher and turn off the water supply.

Any time you’re making adjustments to an appliance, unplug the machine first. During this repair, it’s also a good idea to turn off the water supply to minimize the risk of any leaks or water damage.

2. Disassemble the bottom of the dishwasher.

“Replacing the pump seal” is really replacing four distinct parts: the drain impeller gasket (the white part in the kit you ordered) and three seals. As you disassemble the dishwasher in this step, you will be removing the old parts as you work your way down to the old gasket.

Next, remove the eight screws around the outer edge of the pump connector. Then lift it up and carefully pull it free from the supply tube running down back of the machine

the old pump outlet seal with a flathead screwdriver.

the screw in the center of the gray, circular wash impeller below. Because the wash impeller spins, you have to hold it in place with pliers as you remove the screw. The screw may be hard to remove. Then pry the impeller up and set aside.

the pump filter assembly. To do this, loosen the four screws holding it in place and then pull it out of the dishwasher. Flip it upside down and locate the screw on the base cover. Remove the screw. Then pull the part away from the filter assembly and flip it over. Pull the smaller black seal out of the groove. Then clear away any buildup around the groove.

to the dishwasher. Remove the collar and spring from around the central shaft. Then Pry off the drain cover seal and loosen the screw holding the drain cover in place. Then pick up the cover.

lose the two white check balls in the cavity that may pop free. There is another check ball in the base of the pump filter assembly. Keep track of all three.

that, remove the drain impeller gasket.

3. Prepare the kit for installation.

Pop the holes out of the white gasket and discard the extra material. The kit is universal so it comes with an extra seal. Match up the new seals with the old ones to find which part you don’t need and set it aside.Before you begin reassembling the machine, make sure you know where all three white check balls are.

4. Reassemble the machine as you install the new pump seal parts.

Orient this part so the main cutout fits around the central shaft and extends towards the edgeless portion of the metal circle below. Press it into place. Make sure the two small, circular cutouts in the gasket fit in place and the part lays flat

one of the white check balls into the medium circular cutout at the far end of the gasket.

Locate the oval drain cover you removed earlier. Take the smaller seal and press it into the oval groove at the bottom of the part. Make sure it’s fully in the housing

set it above the drain impeller gasket. The opening should rest above the circle where you put the check ball. Once it’s in place, tighten the screw into the hole to the left of the opening to hold the drain cover in place.

the spring and circular mounting you removed earlier. Make sure the extending edge of the spring slots into the gap in the mounting. Then slide the parts over the central shaft. The bottom of the spring as has a hook that needs to notch into the impeller.

Find the pump filter assembly you removed earlier. This is the large white circle. Add the final check ball into the opening in the oval directly below the central circle

, locate the cover, which looks a bit like a magnifying glass without the glass. Set the drain cover outlet seal into the oval groove that extended out past the circle. Make sure it’s fully seated in the groove.

the cover over and screw it into place. Then flip the whole assembly over. There is a gap in the panels ringing the outside of the assembly. Make sure that lines up under the supply tube in the back as you set the assembly down around the central shaft. Tighten it in place with the four screws you removed earlier.

Tighten it in place with the sealed screw. Remember that you need to hold the impeller in place with pliers as you tighten this screw.

Press the pump outlet seal into the circular groove at the top of the filter assembly. Make sure it sits fully in the housing without pushing up out off the groove or folding

Then plug the dishwasher back in and turn on the water