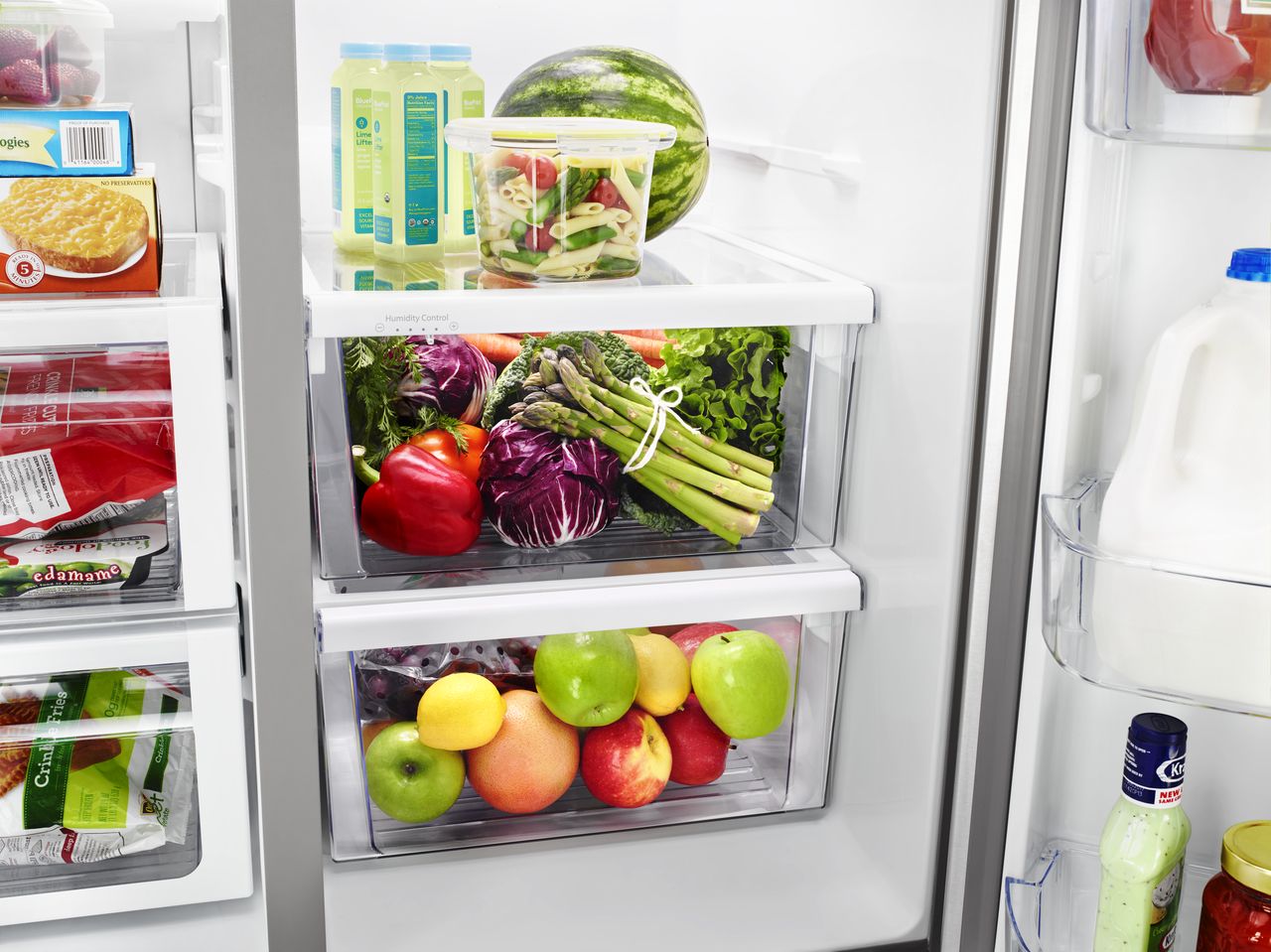 Before you get started, unplug the refrigerator. This is an essential safety step for every appliance repair project.

Next, pull the upper bracket out. To do this, roll it all the way out and lift it up off the rails. Set it aside. Reach inside the freezer section to start removing the ice dispenser. First, remove the screw under the dispenser. Also, loosen (without fully removing) the two upper screws. These top screws sandwich the hooks against the inside of the freezer, so once the screws are loose enough, you can just lift up the dispenser to free it. Before you pull the ice dispenser out, tilt it forward and pull the water inlet tube out of the back. Also, unplug the wire harness to the right of the water tube.

Set the ice maker aside.

Then remove the rails by pulling them as far forward as possible. This should reveal a tab behind the metal that you can press back with a flathead screwdriver to slide the rail off completely. Depress the tabs on both sides, then push the rails back in so you can slide out the whole rail assembly. Set it aside.

After that, remove the plastic rail housings and end caps. Remove the three screws on each side’s rail housing and set both parts aside.

2. Disassemble the rear wall of the freezer interior.

First, remove the air grill at the top middle of the back panel. Locate the release tab on the right side of the grill and release the tab with a flathead screwdriver. This will free up the right edge so you can grab it and pull it to the right so it comes free.

Next, remove the temperature sensor holder. Depress the tab. Once it pops free, unclip the air sensor from the back and unthread it. Set the sensor cover aside. Now you can remove the rear cover panel. Start by depressing the two tabs on either side of the ice maker’s wire harness. Push the harness back behind the panel. Then remove the four corner screws that hold the panel in place. Carefully pry the bottom edge forward by placing the screwdriver in the vent grille and twisting it forward. Once it pops free, pull it out at angle while watching to make sure it doesn’t tug at the wire harness or water supply tube.

Unplug the defrost heater by unplugging the wire harnesses on the left under the water supply tube and on the right in the top corner.

Next, loosen each of the two screws that were under the wire harnesses. These hold the heater assembly in place. The evaporator is the large metal assembly with the horizontal metal tubes and vertical lines of metal. Reach behind the top tube on both the left and right side to depress small tabs that hold the evaporator in place. Also, look for tape around the evaporator frame so you can peel it back before removing the part.

Once the tabs are free, pull out the aluminum and copper evaporator carefully. The lines are fragile and bend easily, so don’t use them as a grip. Instead, use the bottom corners to pull it up out of the drain pan and slide the bottom of the evaporator forward. Let it hang for a second. Remove the wire harnesses that are caught in the top corners of the frames now that you have access.

Return to the bottom of the evaporator and look for two wire retaining clips. These clips hold the black defrost heater along the edge of the evaporator. They’ll blend into the metal lines, so look for wires that wrap around the bottom metal tube. Pull the clips out of the way with needlenose pliers.

Now you can carefully pull the black U-shaped defrost heaters out of the evaporator. Make sure the wire harnesses on the ends don’t get caught.

First, set the new defrost heater on the floor of the freezer compartment. Thread the wire harness through the curved edges of the metal tubing, or coils, on both sides of the evaporator.

5. Reassemble the rear interior of the freezer compartment.

First, set the evaporator and defrost heater assembly back onto the lifted shelf in the back of the freezer.

Next, press the wire plugs back into the vertical brackets. The cutouts are uniquely shaped to ensure the plugs are installed at the correct orientation. Make sure you here the plugs snap into place. Then lift up the evaporator assembly one more time to set it on the drain pan.

First, reinstall the back cover panel. Slide the part in at an angle with the top going in first. Use the grille cavity as a handle so you can carefully put it in position. Instead of snapping it into place, let it lie against the left ice dispenser screw. This gives you an opportunity to make sure the temperature sensor on the right is on your side of the cover and to line up the water supply tube with the hole. Slide both the water supply tube and the plug into their cutouts.

Secure the panel in place with the four corner screws.

Next, reattach the temperature sensor cover. Thread the sensor through the back, and then flip it around. Snap it into place against the three tabs. Also, press the air grill into place on the top cavity. After that, reinstall the rail housings on either side of the freezer. Press them into place and then secure them with the three screws. Now you can slide the rail assembly back into both parts. Alight it and push it smoothly into the freezer. Make sure there’s not too much friction, which could indicate it’s uneven, and that it clicks into place on both sides.

Then reinstall the ice dispenser. Hold the ice maker near the left corner and plug in the wire harness. Then hang the part on the two screws while simultaneously making sure the water tube threads into place. Tighten the two screws so the part can’t move, and also retighten the bottom screw.

Plug your refrigerator back in and let the fresh food section regain temperature equilibrium. For more repair guides and troubleshooting help, contact us at Appliance Express. We can offer you help or send a trained appliance technician to your location.