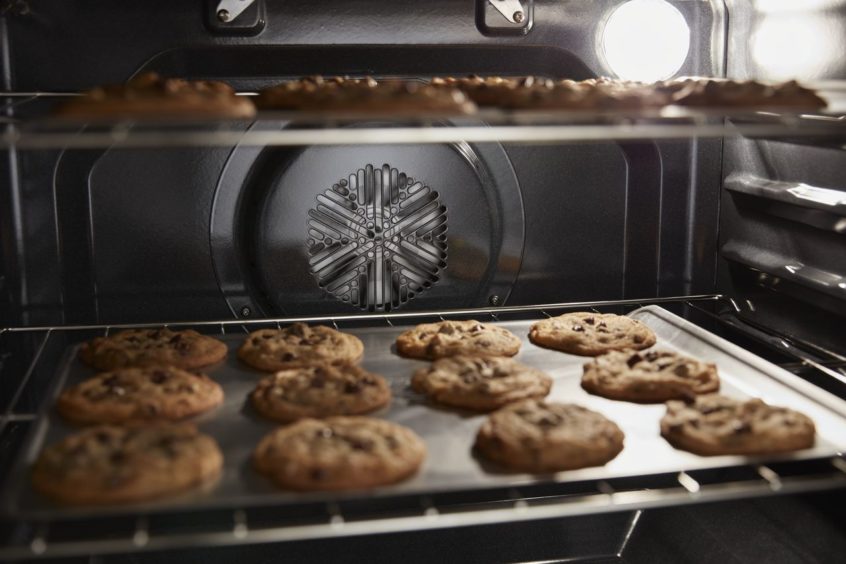 How Does a Convection Oven Work?

Convection ovens are warmer and cook food quicker than a conventional oven. Why? In a conventional oven, the baking element is located at the bottom causing heat to rise to the top of the oven cavity. Food placed on the upper rack will cook faster than food on the lower rack. The convection oven has a fan that evenly distributes the heat around the food no matter what rack it is placed on.

Let’s say you want to bake a few dozen chocolate chip cookies in a conventional oven. Because of the uneven distribution of heat, in order to bake cookies that have the same consistency, you know you can only cook one or two pans at a time. Cooking one rack at a time of 15 cookies each time means you could be at this project all day long. The even distribution of heat of a convection oven means you can cook as many pans of cookies that your oven can hold without the fear of the top batch cooking more than those on the bottom rack.

Moreover, food in a convection oven cooks food about 30% quicker. The overall efficiency of a convection oven, according to the US Department of Energy, could use about 20% less power annually than a conventional oven.

On the other hand, it is worth noting that souffle’s and lemon meringue pies and other delicate desserts do not cook well in a convection oven because of the moving air caused by the convection fan. You don’t want to serve a souffle that looks like it just came out of a blustery squall.

Consumers began using the convection oven during the 1950s. Who would have ever thought that a simple fan strategically placed in an oven cavity could do something as wonderful as evenly distribute the heat produced by the upper and lower heating elements? The benefits of convection oven cooking are many. We are highlighting a few. Be sure to add to the comments section below how convection oven cooking has made your life better.

In order to access the convection fan motor, the double oven needs to be removed from its cabinet.

How To Remove the Oven

Pro-Tip: Place all screws you remove in a container so you can easily locate them later.

Please Note: If the conduit cable is not long enough to allow access to the rear of the oven, remove the power and ground wires from the junction box.

How to Install a Convection Fan Motor

Now that the repair is complete, flip the breaker switch on and bake your favorite dish using your new convection fan motor.

Any questions or comments? Feel free to contact us.